“Food is medicine” according to New Paltz-based nutritionist Vicki Koenig. Her approach to nutrition counseling — making the information accessible and inspiring people to move from good intentions to action — has been developed over the course of a nearly 28-year career. And while each client receives an individualized plan, in the end it comes down to basically this: The way to achieve optimal health and weight loss is to make lasting changes in one’s eating behaviors. “When behaviors become habits and are reinforced,” she says, “you create success for yourself.” 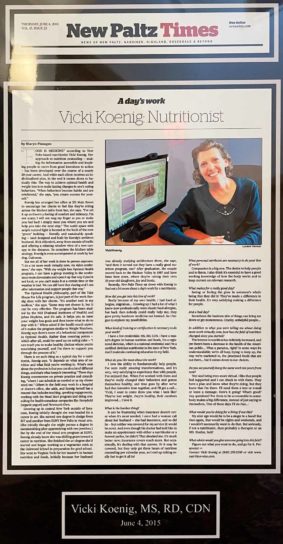 Koenig has arranged her office at 231 Main Street to encourage her clients to feel like they’re sitting across the kitchen table from her, she says. “I’ve set it up so there’s a feeling of comfort and intimacy. I’m not scary; I will not wag my finger at you or make you feel bad! I simply meet you where you are and help you take the next step.” The sunlit space with ample natural light is located at the back of the new “green” building — literally and sustainably speaking — (and designed and built by Koenig’s architect husband, Rick Alfandre), away from sounds of traffic and offering a relaxing window view of a tree canopy in the distance. To complete the kitchen table analogy, Koenig is even accompanied at work by her dog, Guinness.

But not all of her work is done in person anymore. “I do a lot more work virtually now, via video conference,” she says. “With my weight loss Optimal Health program, I can have a group meeting in the conference room downstairs and open it up that way if you’re not local, or you can’t make it at a certain time or the weather is bad. We can still have that sharing and I can offer information and support people that way.”

The Optimal Health philosophy, part of the Take Shape For Life program, is just part of the work Koenig does with her clients. “It’s another tool in my toolbox,” she says. “Some may not choose it, but it can be very effective. The program has been studied by the NIH [National Institutes of Health] and Johns Hopkins, and it’s safe. It helps you to meet your weight loss goals and then know what to do to stay with it.” When asked if the health coach aspect of it makes the program similar to Weight Watchers, Koenig says there’s more of a behavioral component to Optimal Health. Rather than counting points — which after all, could be used up on eating cake — “I can teach you to make healthy choices where you’re nourishing yourself, and I’m there to support you through the process of it.”

There is no such thing as a typical day for a nutritionist, Koenig says. “It depends on what area of nutrition and what field you’re working in. What’s neat about the profession is that you can do a lot of different things, and that’s what keeps it interesting.” These days Koenig concentrates on private practice and consulting, “where I can schedule as needed or as my clients need me.” Others in the field may work in a hospital or doctor’s office, she adds, and Koenig herself has a resumé that includes teaching, speaking engagements, working with the Head Start program and doing consulting for health-conscious companies like Stonyfield [organic yogurt] and Newman’s Own.

Growing up in central New York outside of Syracuse, Koenig initially thought she was headed for a career in art. She earned one degree in design from RIT and another from SUNY New Paltz in visual arts. (She initially thought she might pursue a degree in metalsmithing after apprenticing with two jewelers.) But by the end of the visual arts program at SUNY, Koenig already knew she was shifting gears toward a career in nutrition. She finished the art degree she’d started and began working as a vegetarian cook at the Oakwood School in preparation for grad school. She went to Virginia Tech for her master’s in human nutrition and foods, initially because her husband was already studying architecture there, she says, “and then it turned out they have a really good nutrition program, too!” After graduation, the couple moved back to the Hudson Valley in 1987 and have been here since, where they’re raising their twin 15-year-old daughters, Joy and Sonia.

Recently, New Paltz Times sat down with Koenig to find out a bit more about a day’s work for a nutritionist.

How did you get into this line of work?

Really because of my own health; I had food allergies, migraines… Growing up I had a lot of what I know now professionally were classic food allergies, but back then nobody could really help me; they gave pretty hardcore medicine out instead. So I began to explore my possibilities.

What kind of training or certification is necessary to do your work?

I have a few credentials: MS, RD, CDN. I have a master’s degree in human nutrition and foods, I’m a registered dietician, which is a national credential and I’m a certified dietician nutritionist in the state of New York. And I maintain continuing education in my field.

I love the ability to fundamentally help people. I’ve seen really amazing transformations, and it’s very, very satisfying to experience that with people. I’ve enjoyed that. When I’ve worked with them and they’ve really changed their behaviors and gotten themselves healthy, and time goes by after we’ve had that intensive time together, and I’ll get a call… ‘Vicki, I want to come show you what I look like!’ They’ve lost weight, they’re healthy, their numbers improved… I love it.

What is the hardest thing?

It can be frustrating when insurance doesn’t cover when it’s most needed. I once had a woman call about her husband — she had insurance, and so did he — but neither was covered for my service (it would be now). And even though his doctor had told him to make an appointment with either a nutritionist or a funeral parlor, he didn’t! That shocked me. It’s much better now; insurance covers much more. But occasionally, it’s dealing with that system. Or it may be covered, but they only get three hours of nutrition counseling per calendar year, so I end up talking really fast to get it all in!

What personal attributes are necessary to do your line of work?

Compassion is a big one. The desire to help people and to listen. I also think it’s essential to have a good working knowledge of how the body works and to keep current on relevant research.

What makes for a really good day?

Seeing or feeling the glow in someone’s whole being that they did it! They’ve made a difference in their health. It’s very satisfying making a difference for people.

And a bad day?

Sometimes the business side of things can bring me down or get monotonous. Cranky, unhelpful people…

In addition to what you were telling me about doing more work virtually now, how has the field of nutrition changed since you started?

The interest in nutrition has definitely increased, and yet there’s been a decrease in the health of the American public… What a paradox, right? In some ways it’s understandable; we’re all busy, trying to keep up, the way we’re marketed to, the processed foods that are out there… but it comes down to our choices.

Do you see yourself doing the same work ten years from now?

Yes! And being even more virtual. I like that people feel supported and I can check in with them. They have a plan and know what they’re doing, but they know that I’m there. I’ll send them a text or e-mail or leave a message: How’s it going? What’s good? Any questions? For them to be accountable to somebody makes a big difference, instead of just saying to themselves, ‘One of these days I’ll do that…’

What would you be doing for a living if not this?

My alter ego would be to be a singer in a band! But then again, that would be nights and weekends, and I wouldn’t necessarily want to do that. But seriously, if not a nutritionist, then probably a therapist or an MD. Similar, huh?

What advice would you give someone going into this field?

Figure out what you want to do, and go for it. Persevere!